From the surface to the seabed: Microplastics Back to overview Kleine Riffische leben schnell und sterben jung 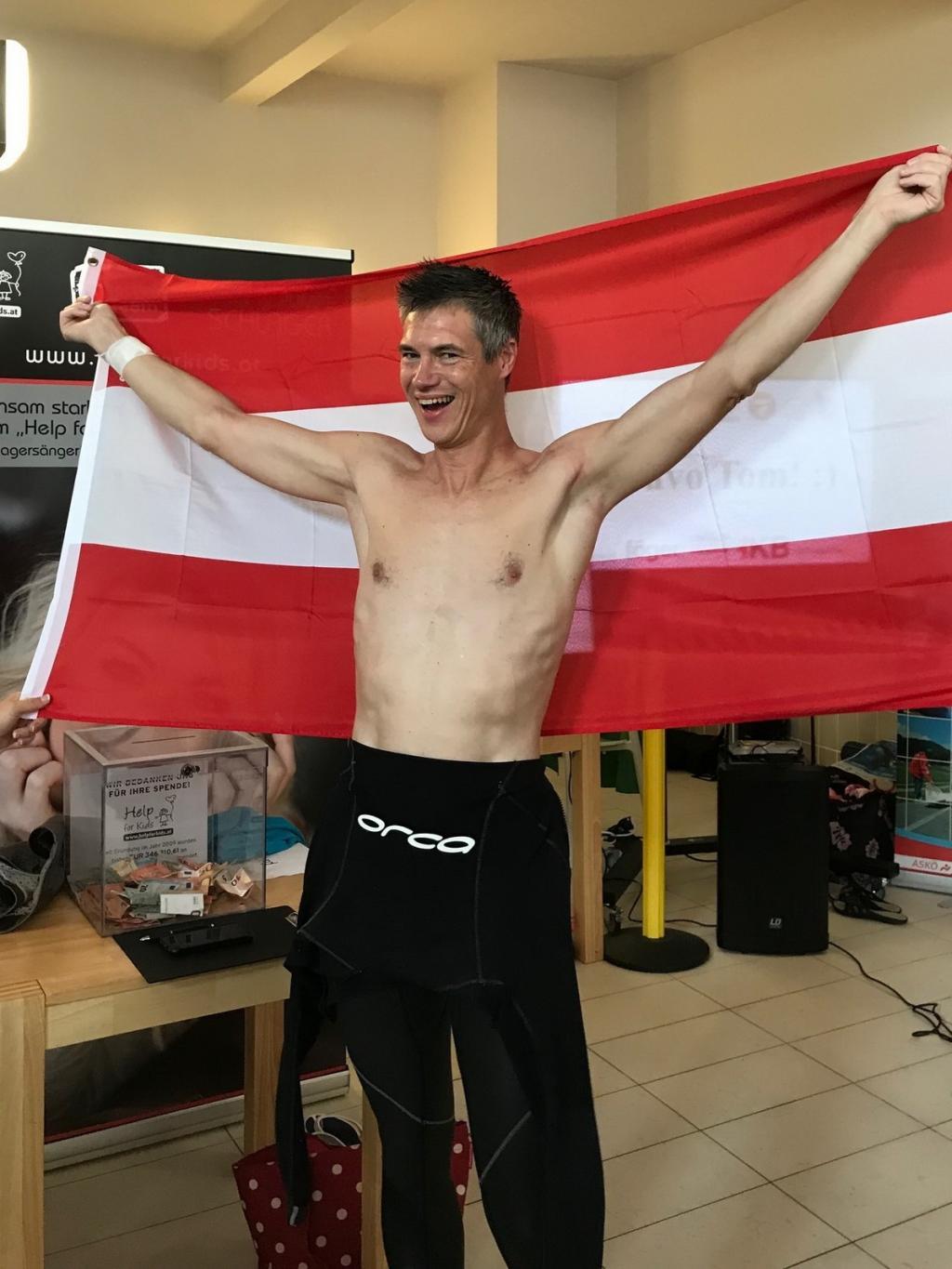 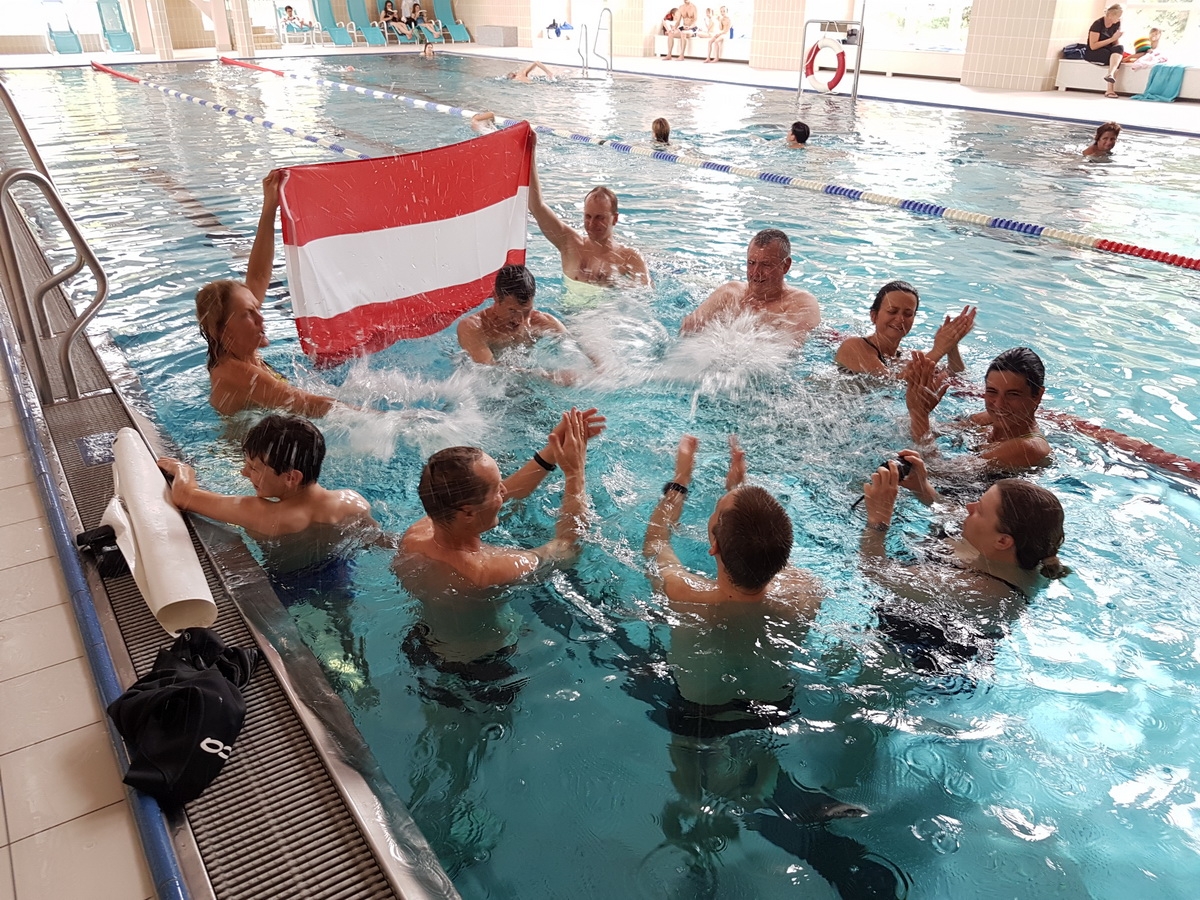 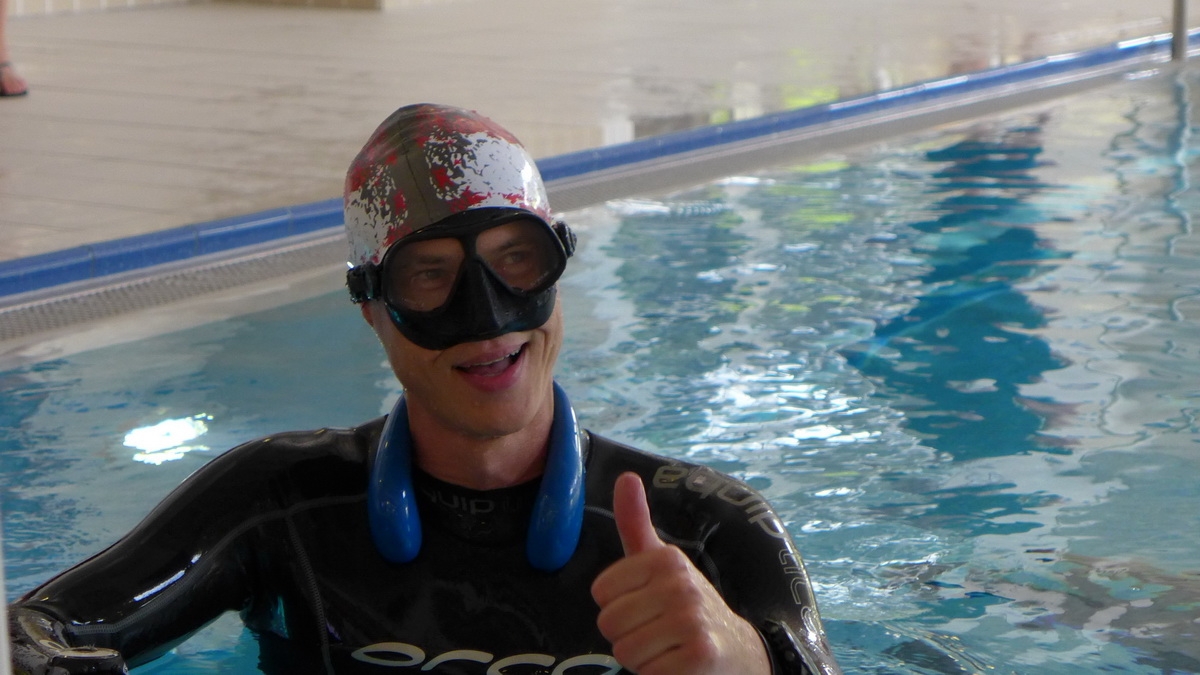 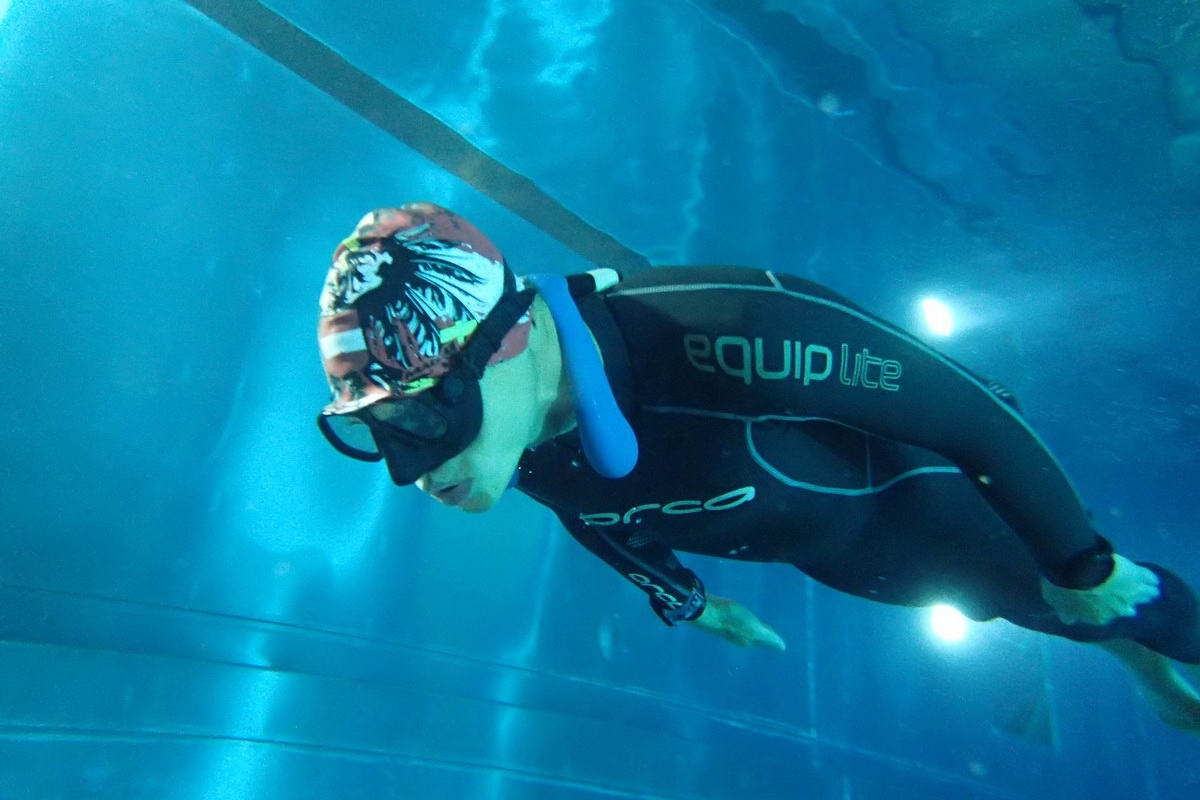 © Tom Oberhuber during the record attempt 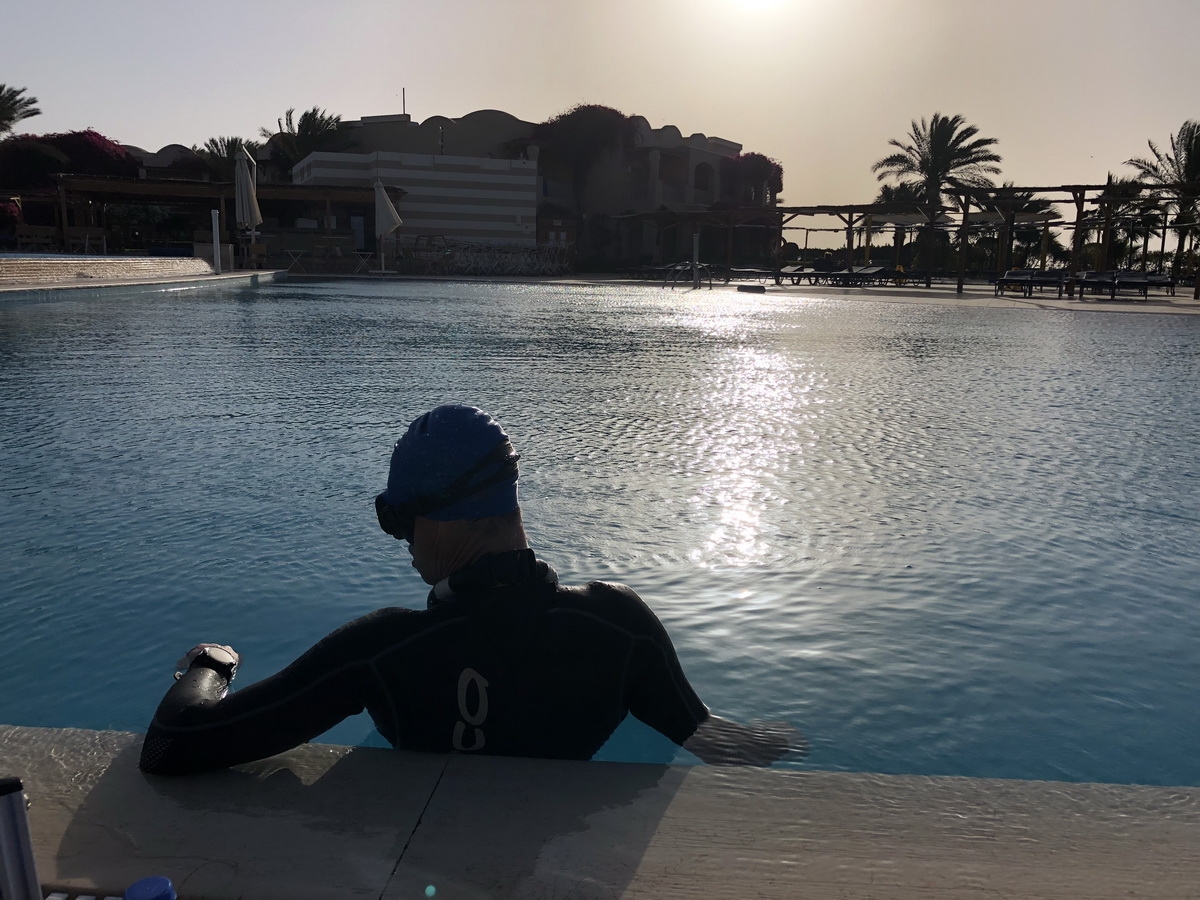 © Tom Oberhuber during training in Egypt 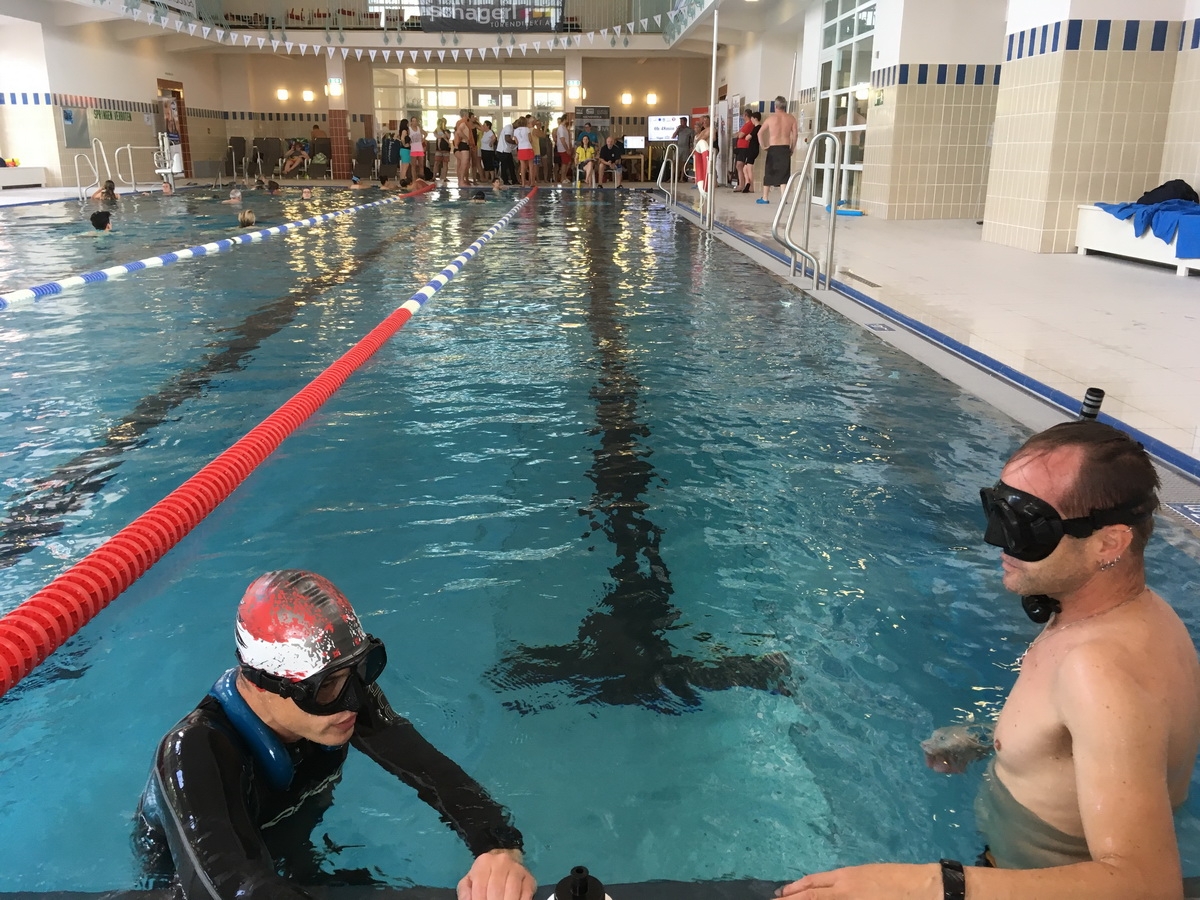 © Full concentration before the record attemt starts: 48 minutes to go ...

24 kilometres without fins and of course without a breathing device: a challenge only possible with perfectly planned break times. Thomas Oberhuber mastered the extreme challenge with the following plan: to dive a track length - 25 meters and then a short 20 seconds break for breathing. Then the next track – and again and again for the incredible number of 960 lengths. In sum, a truly breathtaking performance Tom has clearly overbid. On May 4, 2019 at 16:00 o'clock it was said: 24 hours freediving and a distance of 26.350 meters. This is the new world record brand! Austria's Thomas Oberhuber sets a fabulous world record and surpasses the old world record of André Grabs at 23,500 meters by 2850 meters.

As soon as Tom Oberhuber had dived the targeted 24 kilometres, his encore began. The 46-year-old Austrian competed a new world record in apnea diving on Friday, May 3. 23.55 kilometres in 24 hours was the previous record of the Freiburg athlete André Grabs.

About one and a half hours before the end of the 24 hours, the new record of Tom was accomplished. What happened in the Innsbruck indoor swimming pool Amraser Straße on 3 and 4 May is not to be understood with numbers and facts alone. A 24-hour top performance had preceded when Tom surfaced for the last time at 3:59 pm on Saturday afternoon at the end of his 25-meter run and began his 15-second, four-breath surface interval almost like in a trance. Then he was about to start for the next round but something irritated him: the crowd cheered loud! Only now did the technician from a planning office in Mils near Innsbruck understand that the rough going was over: done! A total of 26.35 kilometres, that is 1054 lanes of 25 meters each. This are the numbers Tom had dived in the 24 hours while following a big plan, exactly structured even for the smallest details and yet so unplanned and changeable, that you automatically ask the question: "How can someone do that?"

Tom Oberhuber is a phenomenon. Just a little over ten years ago, he started scuba diving with his wife Monika. The book "Mastering Boundaries Through Mental Strength" by the nine-time apnea world record holder Christian Redl brought Tom in 2012 in contact for the first time with the subject of freediving.
A birthday present from his wife took him to Graz for an apnea weekend workshop and there it happened: "It's almost like a virus ... After this seminar I was totally fascinated and infected by the apnea diving and I knew that this Sport will continue to fascinate me for a very long time," says Tom about his initial apnea phase.

Meanwhile, he won eight gold medals at the Austrian Championships and scratched the 7 minute limit in static. His Austrian record for dives without fins is 125 meters and with fins 161 meters.

No fun event: dive 24 kilometres in an indoor pool

Tom was an active endurance athlete in his youth. Even today he is active in middle-distance and long-distance running and last year he also finished his first marathon. And from this combined love of endurance sports and apnea disciplines Tom derived the idea for this incredible 24-hour apnea world record. "In both sports a lot happens in your head to be successful. The mental component is extremely important and I think this combination is very exciting," says Tom. Almost exactly a year ago, the idea for this record attempt was born together with fellow teammates, of his dive club.  Tom, his wife and the teammates spent a lot of time with the extensive preparations in the last months.

On 3 May at 4 o’clock PM the starting signal was given in the swimming hall in Innsbruck. Diving 24 kilometres in an indoor pool, during the opening hours - under the curious gaze of the audience, is not a fun event. Track followed by track followed by track… 25 meters, 25 meters back, again and again. At the beginning still relaxed with three leg and three arm strikes per track, technically totally clean, well coordinated and always with a glance at the computer on the arm. About 35 seconds each way. Then emerge and breathe three to four times in 15 seconds, relax, slowly submerge again, repel and start again the same game.

"No track is like the previous one, a lot of things are going through your mind," reports Tom. At the border to the closed competition course sometimes whole groups of children of swimming clubs and school classes stand in the pool with their diving masks and watch the so monotonously acting athlete underwater. Thoughts pulsate through Tom's head, pop up and disappear again ...

Plan your dive and dive your plan

Colleagues, buddies, friends – all come by, greet from the edge of the pool and cheer to the seemingly absent, totally focused athlete. 15 seconds are short, the breathing must be precise and in the first few hours Tom has to take care of himself to stay focused and not losing the thread because of an euphoric mood and the good feeling that everything is running so smooth...
"Plan your dive and dive your plan" is here, in the water, existential. The work-load of the body must be completely in balance. Too much speed will increase the lactate values in the blood and the consequences will be less performance or even a breakdown.

For weeks, the athlete together with the support of the experienced diving medical doctor Frank Hartig from the Klinikum Innsbruck and his personal trainer Chuks from the fitness studio "The Point" in Hall and the friendly sports student and personal trainer Felix Pik repeatedly put all the parameters to the test and optimized them. Measurements of oxygen levels, lactate curves, CO2 traces, lung spirometry, body temperature monitoring due to the risk of hypothermia despite 30 degree water temperature in the pool were performed during the 24 hours - nothing was left to chance. Coach Chuks took care of the proper nutrition and preparation training, which was focused primarily on stabilizing the ligaments and internal musculature. Endurance and strength training were taboo, because building new muscle mass would cause fatal changes in the oxygen balance ... "That's why the plan was so important, because if you do too much out of the good feeling, the ambitious plan will not work," Tom knew and therefore followed the specifications and instructions of his coaching team exactly.

At the time of the record, there were nearly 20 people who supported Tom and cared for him. Eight dive blocks of two to two and a half hours each were planned. In the short breaks, Dr. Hartig would monitor blood values, body temperature, lung and brain functions. A not yet healed inflammation in his left arm caused problems after seven hours and interfered with his movements. These were later joined by slight calf problems and the doctor complained about the kidney values. Frank Hartig had always warned that Tom is drinking not enough and his mantra for Tom and the record attempt was: "SMILE, DRINK AND PERFORM". Tom smiled confidently, then drank the required quantities, fed his body the needed but unloved carbohydrate gels, and moved on. The doctors mantra mentally supported him…

The discomfort in his arm and calf eased and so he "survived" the small slack until sleep between 3 and 6 clock in the morning. No one gets through such a work-load without appropriate regeneration phases. The body is moved along borders that are fragile in structure. Muscular problems, dehydration, or carbohydrate deficiency can quickly lead to the end of the dream. Tom was also prepared that the number of leg and three arm strikes per track could eventually increase. From the initially only three or four strikes he needed per track, he had reached five to six before the break, which resulted in a higher load and altered the oxygen cycles. "The break at 3 o’clock in the morning was just right," Tom remembers and it took only a short moment until he sank into a deep sleep in the prepared bedroom (in the sauna area of the bath).

Already in the first three dive blocks Tom had completed 30 laps more than planned. The little woes had evaporated during the short sleeping break and when Tom started again in the early morning at 6 clock, everything went very smooth. Track after track, Tom dived through the pool and every hourly log showed that Tom was on record course. The data of his two watches on his wrists showed him that he was already far ahead.

On average, the athlete dived 65 lanes per hour and already one and a half hours before the 24-hour deadline, Tom Oberhuber had reached his goal of 24 kilometres and thus the new world record. "In the end, everything went perfect. Although I no longer felt my foot and upper arm, but I knew that it would succeed. When the 24 kilometres were done, it was like a rush. I knew that I could even get over the 26 kilometres and the last laps were pure adrenaline," says Tom - still excited by the triumph after the 24 exhausting hours.

When he got out of the pool at 4 pm with shaky legs, he had covered 26.35 kilometres (=1054 lanes). A little surprised by this performance explosion, he enjoyed in the jubilation, the applause, the numerous congratulations and the positive response of the many visitors and friends. "Such a success has many fathers," says Tom, because without his back up team, the coaches and the IKB in Innsbruck, from which the pool for this spectacular record was provided free of charge, this record would not have been possible.

One question remains at the end, however: why do you do that? "I wanted to do something special, something crazy," says Tom Oberhuber. Once...? So that's it now ...? The new world record holder and Guinness record hunter hesitates for two seconds, smiles, takes a sip from his water bottle and says, "Not yet ... there's more to it than that ...!"

The Protocol of the world-record (in German)