Hello Spring – Discover 7 Best Places to Dive in April Back to overview Best job ever? What being a dive instructor is really like. 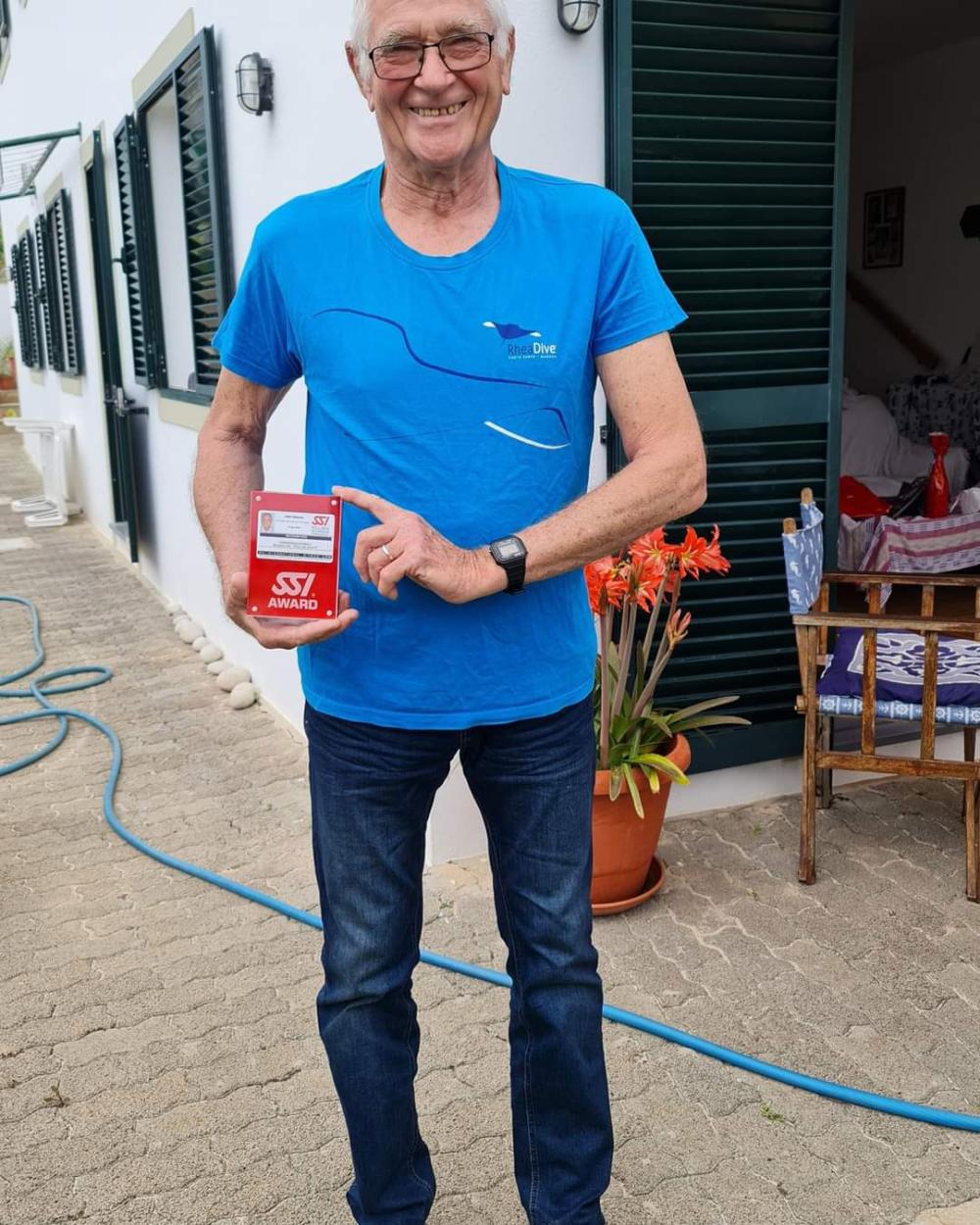 A famous saying states that you cannot teach an old dog new tricks. Well, in Uwe’s life, this most definitely was not the case. After discovering a hidden passion for scuba diving at the age of 59 years old, Uwe Preuss is now the oldest scuba instructor in the Portuguese market and one of the most inspiring scuba divers! Uwe’s story is a shining example that you are never too old to start diving and that, with the right mindset, you can even make a career out of it.

As a child, Uwe Preuss often dreamt that he could breathe underwater with no equipment at all. He could feel the cool water on his face and the thrill of exploring this mysterious environment that only the privileged few got to explore.

Unfortunately, he would always wake up to realize it was only a dream. Although he dreamt of exploring the underwater world as a child, it would not actually become a reality for Uwe until many decades later.

Working in a German Co-Financed Health Program in Tanzania, East Africa, Uwe joined some family members in a Discover Scuba Diving course. One month later, he was certified as an Open Water Diver in the warm waters of the East African Indian Ocean. He was hooked. Uwe jumped into the world of scuba diving feet first, spent time with other scuba divers, and never looked back.

Uwe looked for every opportunity possible to go diving. He became a member of the Diving Section of the Dar es Salaam Yacht Club which offered many diving opportunities in his area.

After racking up 75 dives as an Open Water Diver, a diving instructor who had just joined the club, Laura Swash, encouraged him to embark on becoming an Advanced Open Water diver. He finished this rating in 2003 at 62 years old.

After his job brought him to the three Tanzania islands of Mafia, Zanzibar, and Pemba, Uwe became good friends with Swahili Divers and racked up over 500 dives with them over the years he lived there.

Uwe’s love of diving continued to deepen, and he became a Rescue Diver in March 2004. Learning how to perform a rescue and keep others safe while diving gave him a small glimpse of what being a dive professionals all about.

Uwe Preuss proved that you are never too old to become a dive pro.

SSI is proud to have dive guides and instructors of all ages and nationalities. At 63 years old, Uwe earned his Divemaster rating and started assisting his instructor, Laura, in many courses ranging from Open Water Diver through to SSI Stress and Rescue.

He and Laura loved working together so much that they opened their small diving school called the Promocean Divers. Located within a yacht club, Uwe was excited to train scuba divers and teach the club’s numerous school kids and "jobless" partners of international ex-pats to dive.

He dreamed of spending his retirement training others scuba divers.

With the German mandatory retirement age of 65 creeping closer and closer, Uwe knew the end of his work contract, according to labor laws, was near. He dreamed of spending his days in retirement teaching others the sport he fell in love with.

In April 2006, Uwe turned 65 and had to stop working. Without skipping a beat, on May 1st, Uwe packed his dive gear into his small Suzuki Gypsy and took the day-long drive up to Mombasa, Kenya, to take his Open Water Instructor course.

On May 27th, Uwe became a proud diving instructor at the age of 65!

Uwe returned to Tanzania and started teaching diving alongside Laura for Promocean Divers. However, in 2008 they sold the business and moved to Geneva, where they finally married. After a few cold-water dives in Switzerland, France, and Germany, they were both ready to return to some warmer diving.

Over the next two years, Uwe and Laura traveled to various warm water destinations, including Egypt, Bermuda, and Malta. In June 2010, Uwe and Laura moved to Cascais, Portugal, and were excited to experience diving in this beautiful country.

They fell in love with the culture and unique history that diving in Portugal has to offer.

Although they were happy in their new home country, Uwe felt it only fitting to return to Pemba, where this all started, to log his 1,000th dive on March 4, 2021.

He then spent a decade travelling and diving the world.

A seasoned diver, there were still some underwater sights Uwe still had yet to see, and on November 8, 2012, he finally had his first shark sighting! Uwe was captivated and moved into a season of shark searching.

On his first liveaboard trip, Uwe fell in love with diving all over again as they swam with whale shark after whale shark and other large pelagics. Over the next decade, Uwe and Laura traveled the world, diving with many more shark species and other exciting marine life in Monterey, California, Cozumel, Australia, Papua New Guinea, and the Azores.

Although COVID has slowed down Uwe’s dive travels, he still loves teaching anyone he can about the peace and joy you can find scuba diving in the vast blue sea. Uwe teaches scuba divers at Rhea Dive in Porto Santo, making him the oldest current Portuguese dive instructor.

…And a perfect example of what life can look like after retirement.

At the age of 81, Uwe is not only still diving for fun but teaching others how to dive as well. His passion, dedication, and active lifestyle undoubtedly contribute to his longevity.

Uwe’s life offers a lesson we all can stand to learn: if you want to stay "young" keep moving and find your passion.

Uwe truly embodies the famous words of revered author C.S. Lewis, "You are never too old to set another goal or to dream a new dream."

START YOUR NEXT ADVENTURE – GET CERTIFIED AS A SCUBA DIVER.