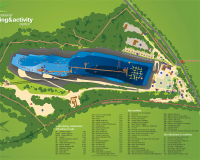 The Black Hawk is a popular wreck dive in the Weymouth area. The bow section of the Black Hawk Liberty Ship is located in Warbarrow Bay at 16 meters deep. The Stern section settled around 55m several miles further. A great wreck for beginners and experienced divers alike.

This is a paddle steamer built at the end of the 1800s. Towards the end of its life it was used as a barge to ferry coal out to the battleships moored within the harbour. In 1935 it was blown from its moorings and ended up wrecked against the breakwater wall where it remains.

The Clan Macvey was an armed British merchant steamship, measuring 400 ft long with a 53ft beam. Sunk by a German submarine in August 1918, she lies virtually upright, sunk into the soft sand almost up to her deck, at a depth of 18m and rising up by 4m from the sea bed.

Starting on a 6m ledge, this is a great site for drift dives. By swimming away from the shore, divers can choose their depth, though most of the interesting stuff is in the shallower region.