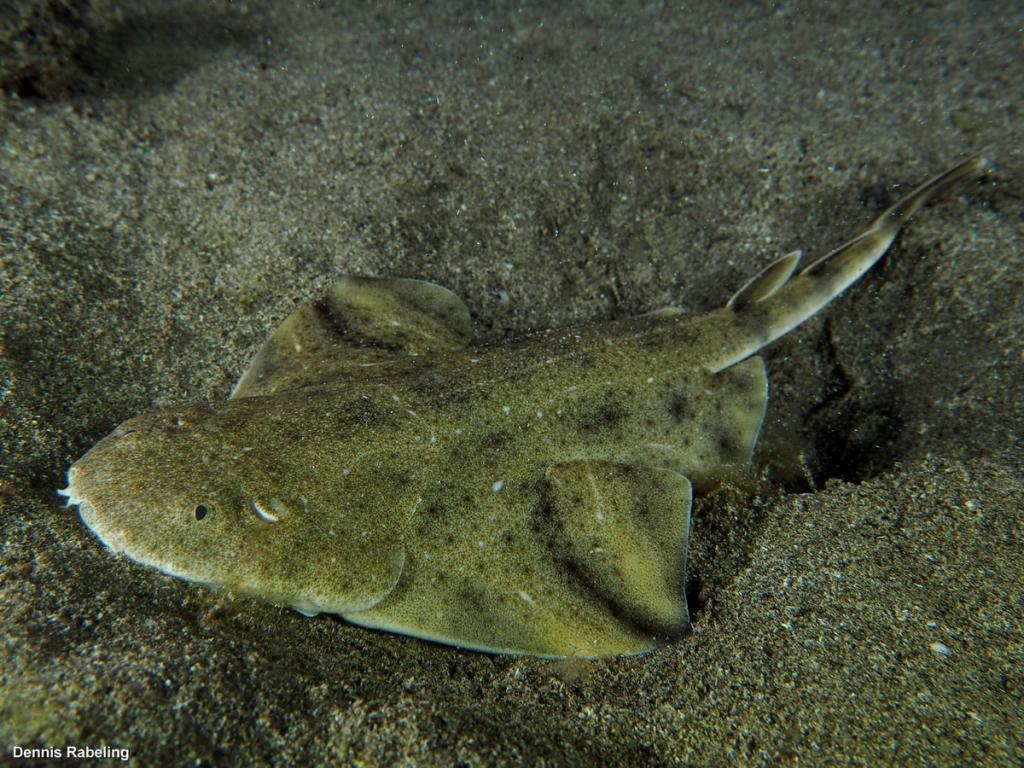 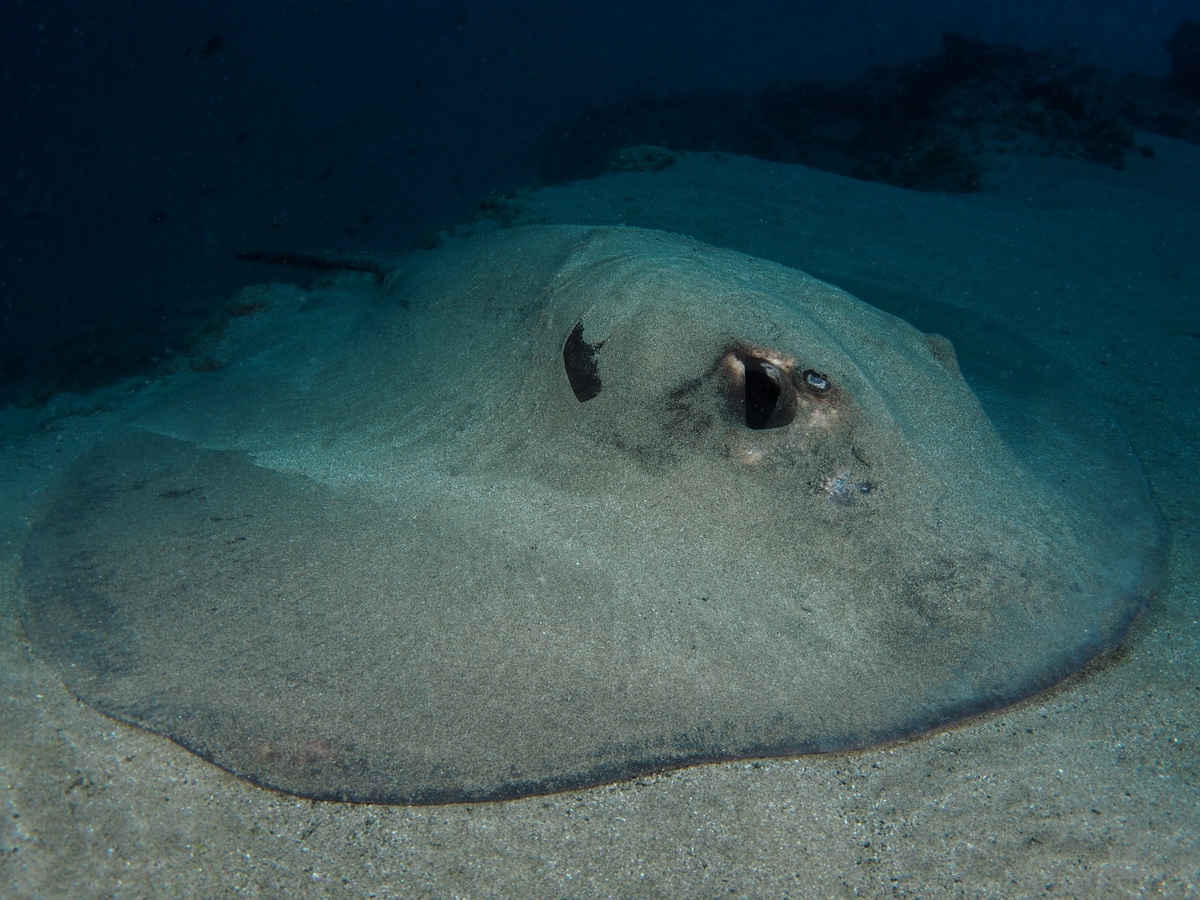 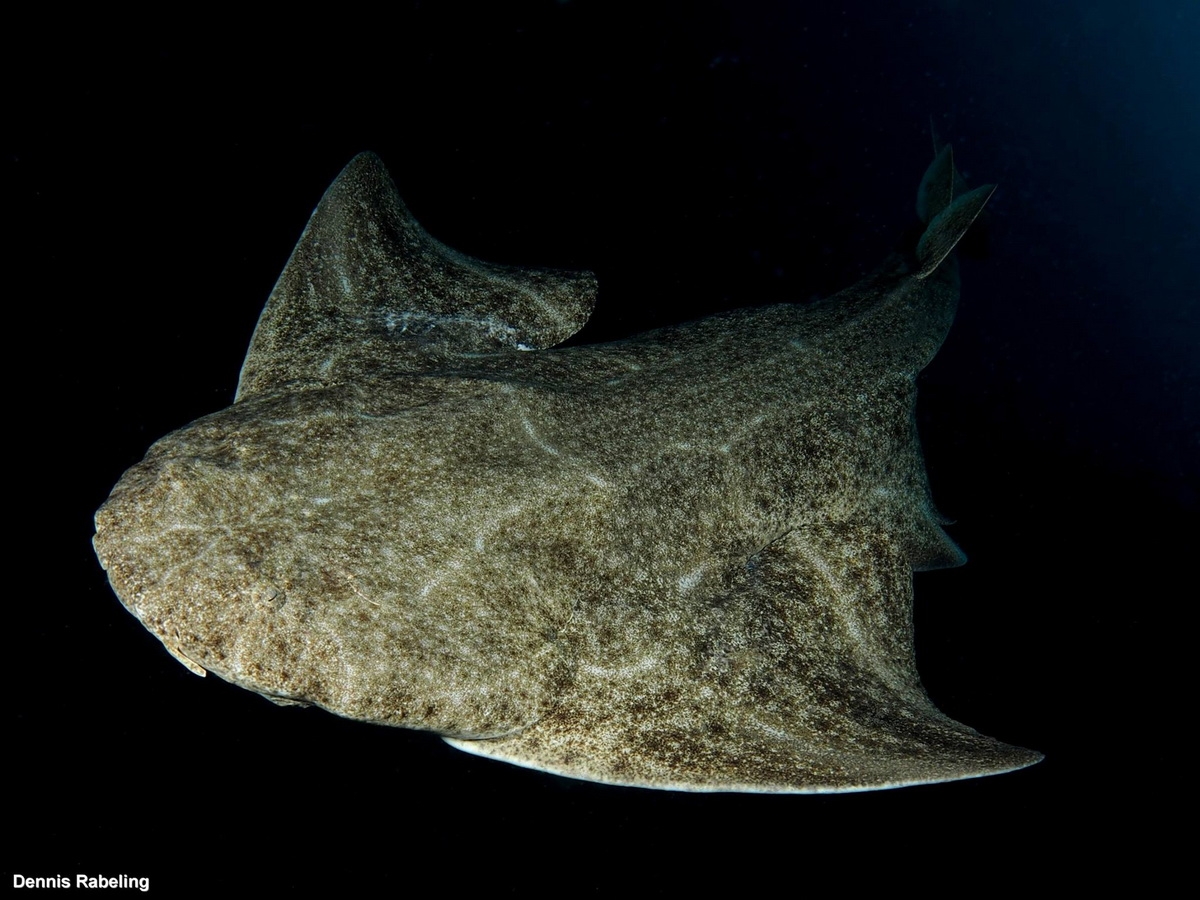 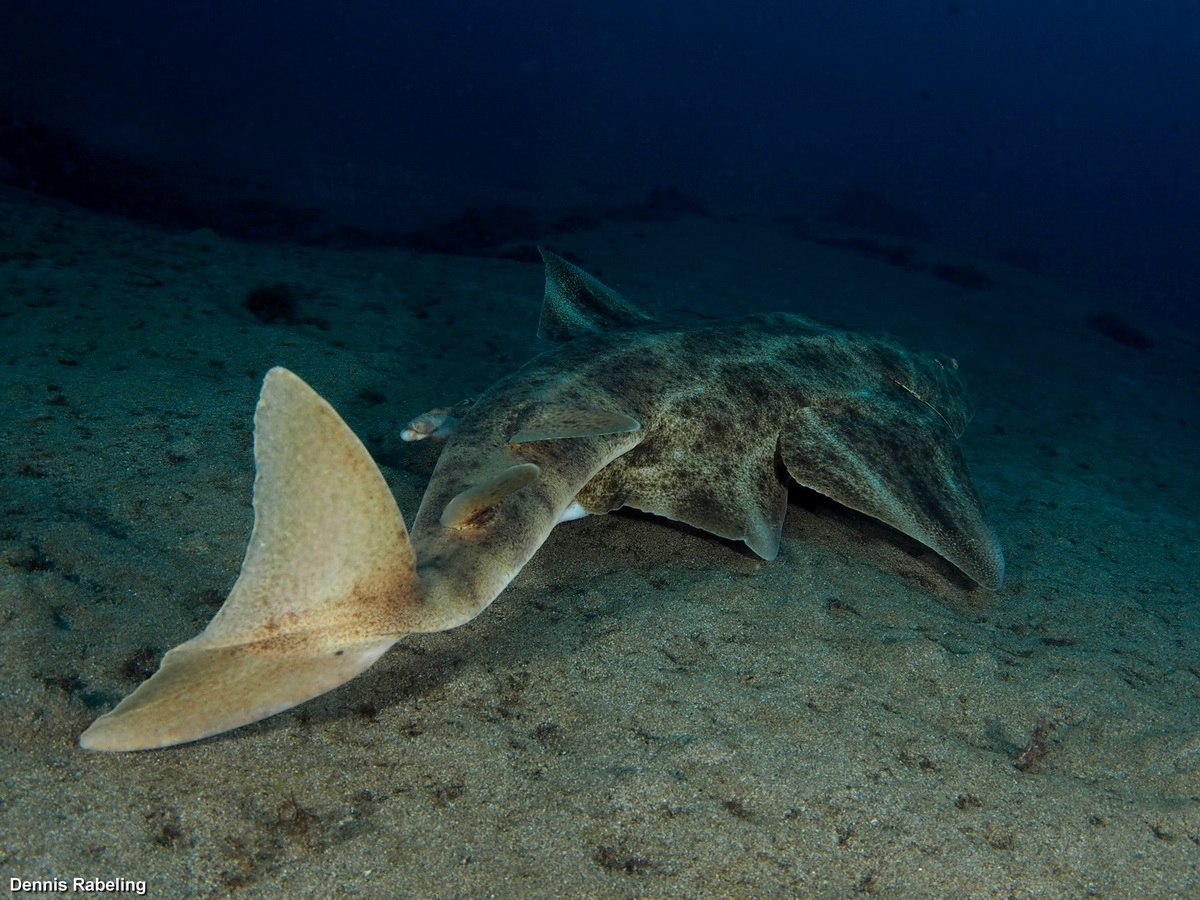 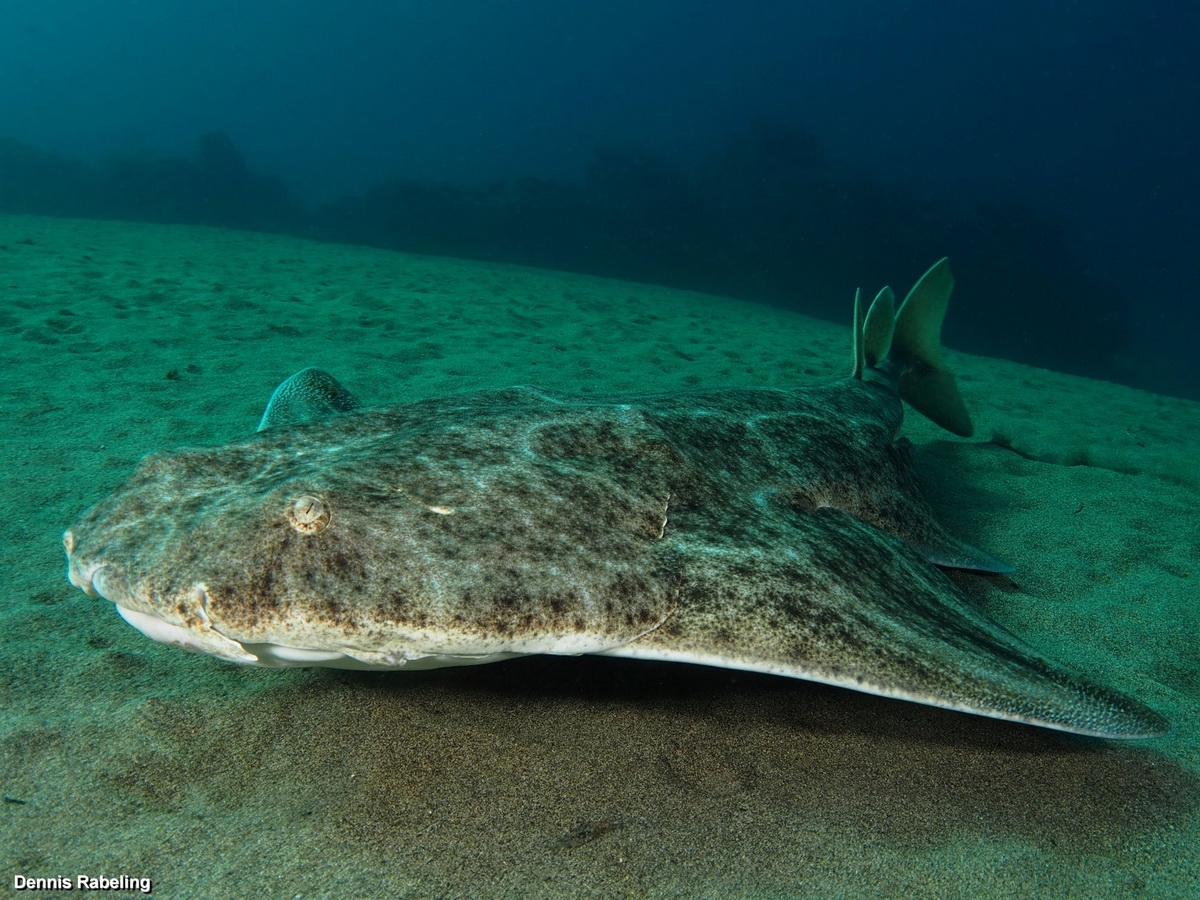 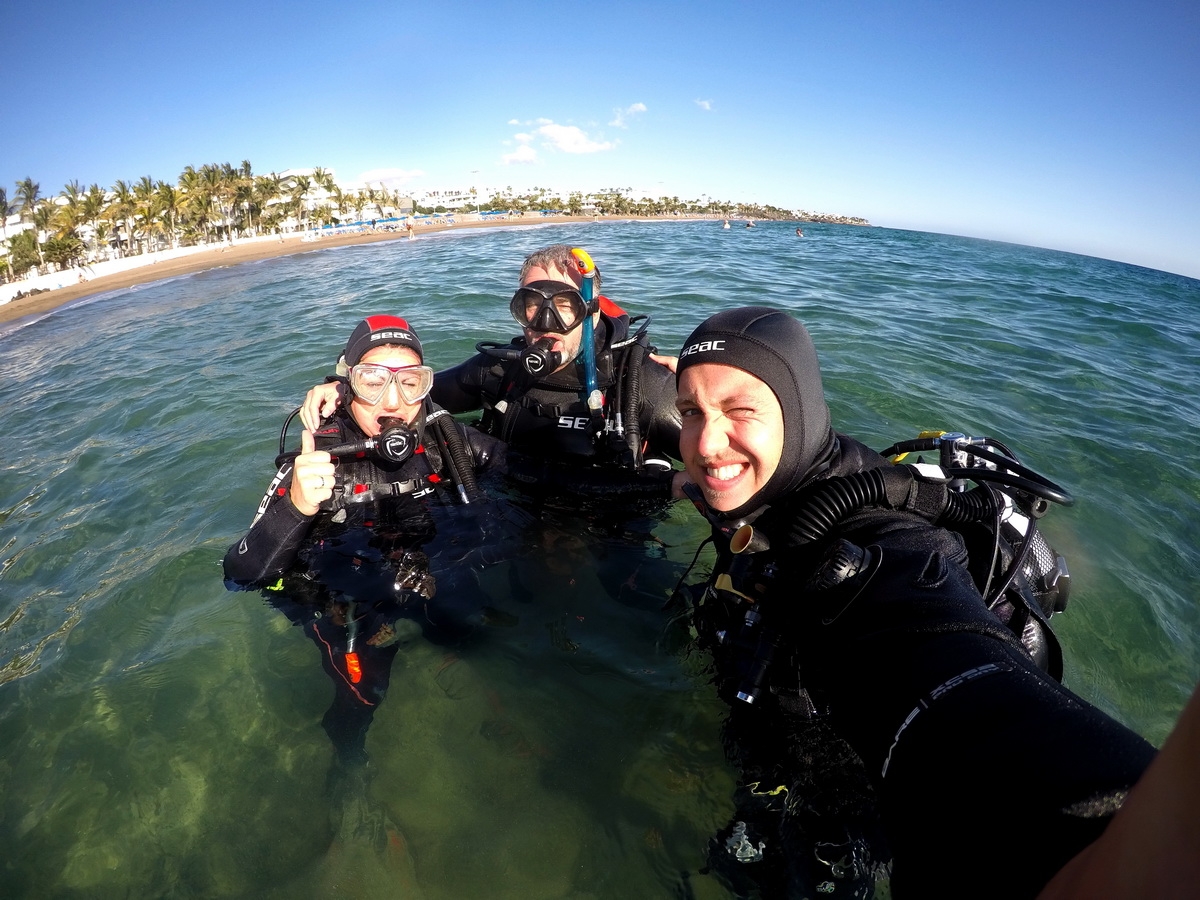 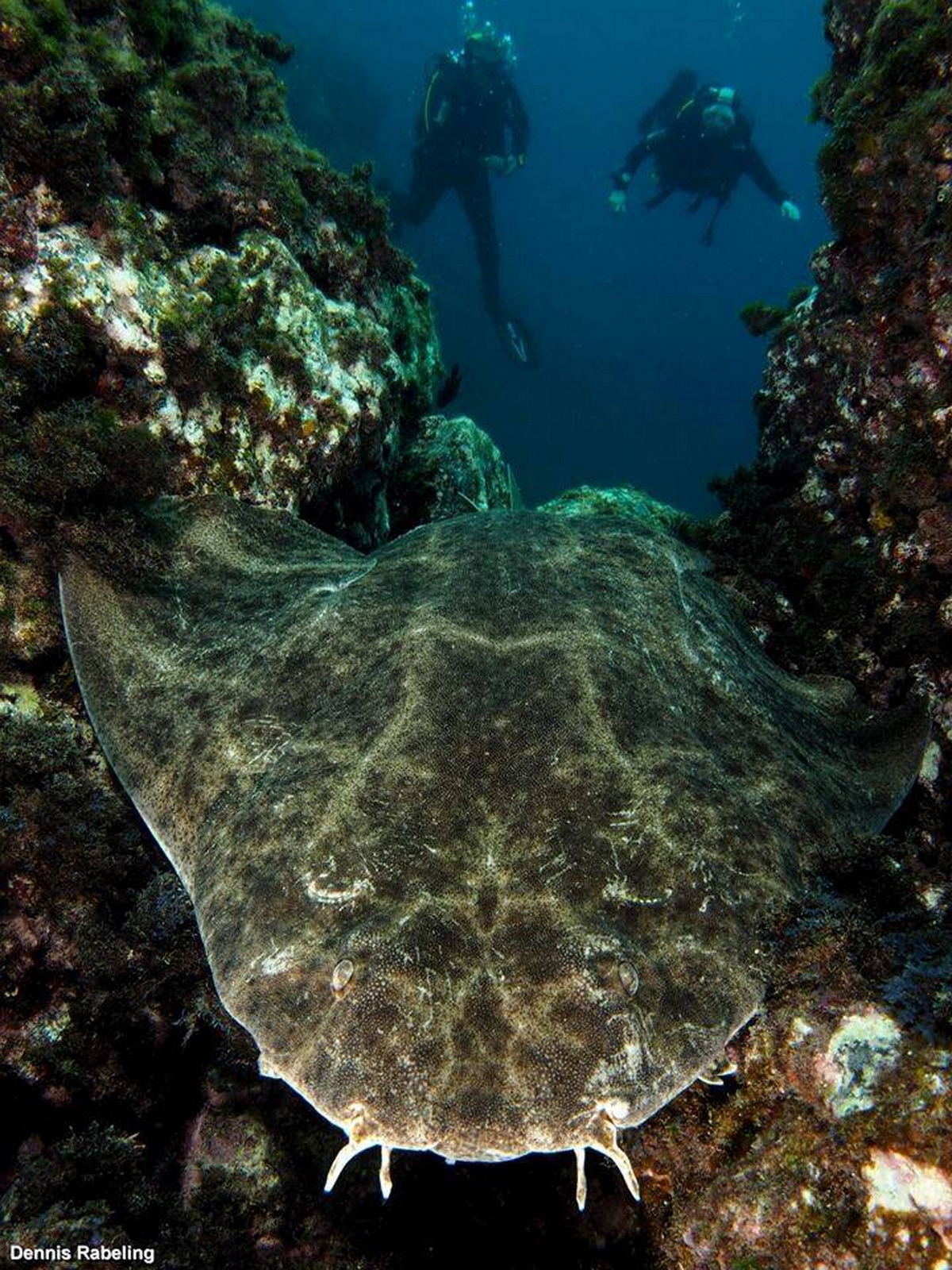 February 10, 2020 The Canary Islands are the home of the Angelshark, and if you want to meet this beautiful shark species, you must definitely visit Lanzarote because here encounters with the shark species happen on a regular base.

The Dutch owner of Euro-Divers Lanzarote Dennis Rabeling and his instructors /guides  know exactly where to be and take you to the best spots to see them, including their own house reef! Unfortunately, the Angelshark  is one of the species that is threatened with extinction, but fortunately scuba divers still come across this species of shark in the Canary Islands with great regularity.

The Latin name of the local Angelshark  is (Squatina squatina)  and usually lives  close to the coast on the seabed and hunts prey from an ambush,  often hidden under the sand. The shark calmly waits for its prey. Especially the contours of this species of shark (Where the sharks gets its name from), the beautiful drawings on the back and the static way of swimming make the shark so very special.

Because this shark species lives so close to the coast, they are also very vulnerable to fishing, especially in the areas where trawlers are active, the numbers of Angelsharks have fallen sharply or no longer exist at all in this special areas. Sad – but true: once upon a time, the Angelshark  was common throughout the eastern Atlantic, the Mediterranean and even in the North Sea. From the Canary Islands till Norway!

It  is usually  not deliberately fished on the Angelshark  and this shark is fact is poor bycatch-  but the excessive fishing has put this species under serious threat and now Squatina squatina ended up on the Red List of the IUCN.An important fact in this tragedy is that the  Angelsharks  reproduce very slowly,  the reason is that this shark species  are only mature very late and with only few offspring  make it to adulthood.

Fortunately, we still come across this Angelshark with great regularity at the Canary Islands and that is mainly because the Canary Islands are not fished with trawlers and are better protected by raising awareness to everyone why it is so important that this species of shark also persists.

To protect the Angelshark  and raise awareness of people, a number of volunteers have set up a project in the Canary Islands and received the appropriate name, the Angel Shark Project. The reason for starting this project is to inform divers,fishermen, the government  and other people and to make it aware that this species of shark is strongly threatened by humanity and what we can take to protect the Angelshark and secure their future.

To learn more about this particular shark species and in particular to find out how much there still are, how the species of shark moves over the islands, or whether they are really tied territory. To get more information about these Angelsharks, a few of them has now been  tagged with a color code, each color code stands for an island where the  Angelshark is tagged and the tag also includes letters that stand for the island and a number. In this way they try to get a view of how big the population is and how they move around the Canary Islands. Also they hope to learn more about their biology, ecology, distribution and the relationship between the remaining populations at the Angel Shark Project.

But on this way we also make people aware of the problems surrounding the  Angel-Shark. Fishermen, divers, beach visitors and  governments  can, for example, help with the conservation of their shark species.

From October to March it’s "Angelshark Season" and divers can meet the Angel Shark almost daily and sometimes even four or five different Angel Sharks during one dive. Angel sharks are not aggressive and lie quietly in the sand or on a rock during the day or waiting for their prey. If they do show aggressively, you can see that in the violent swimming behaviourand fins that indicate an unnatural posture and more or less to high rather than along the body.

From the Euro-Divers house reef, Playa Grande  which is only 150  meters away from the dive centre  you can walk into the water from the beach. The beach is very gradually ending, making it also very suitable for Try Dives  and Beginner courses. Just a few meters deep are the first rock formations where there are also lots of fish species, Cuttlefish, Octopus, Rays and of course the Angel Sharks. If you continue to swim south at the house reef,  you will arrive at spectacular drop-off that runs to about 50 meters – starting at a depth of approximately 20 metres.
This reef is characterized by its rugged structure,  beautiful caves, overhangs and, vegetation and large life, such as several large Groupers, Barracuda, Tuna and small and very large Rays. But also the lovers of macro come to this reef to meet the various beautiful Nudibranchs, Spider crabs, Shrimps etc. Also some Angel Sharks are encountered more often and the guys from the divecenter have even given nicknames to the sharks; they can be recognized by colour, bodyshape and gender.

Specialy during night dives swimming Angel Sharks can be met frequently. When they lie on the ground, they are also easy to spot as their eyes shine in the reflection of the light – just like cat eyes. That is also the same with the many Ray species of Lanzarote .

The best chance to meet Angelsharks is in the period October to March, this is also the period when you see the male and female in an often violent,  but shortperiod of time making love: This ritual is very special to see and experience, where it is important to give them space and keep sufficient distance. In particular the male is very dominant present and is not waiting for competition! But spectacular it is for sure.

Angel sharks  will attack a human only if they feel threatened or enclosed from self-protective.  The divecenter guides always explain to the divers during the briefing that it is important that you never embed the Angelshark  - better to lie down on one side to admire this particular species of shark and  give them the space to swim away when he or she is fed up of the visitors.

Diving on Lanzarote is special and especially when you do various places on the island,  you only notice how  versatile  it is underwater. For more information contact the divecenter at lanzarote@euro-divers.com