Become a Better Freediver: 6 Tips for Beginners Back to overview Dive Health: How to Equalize Ear Pressure 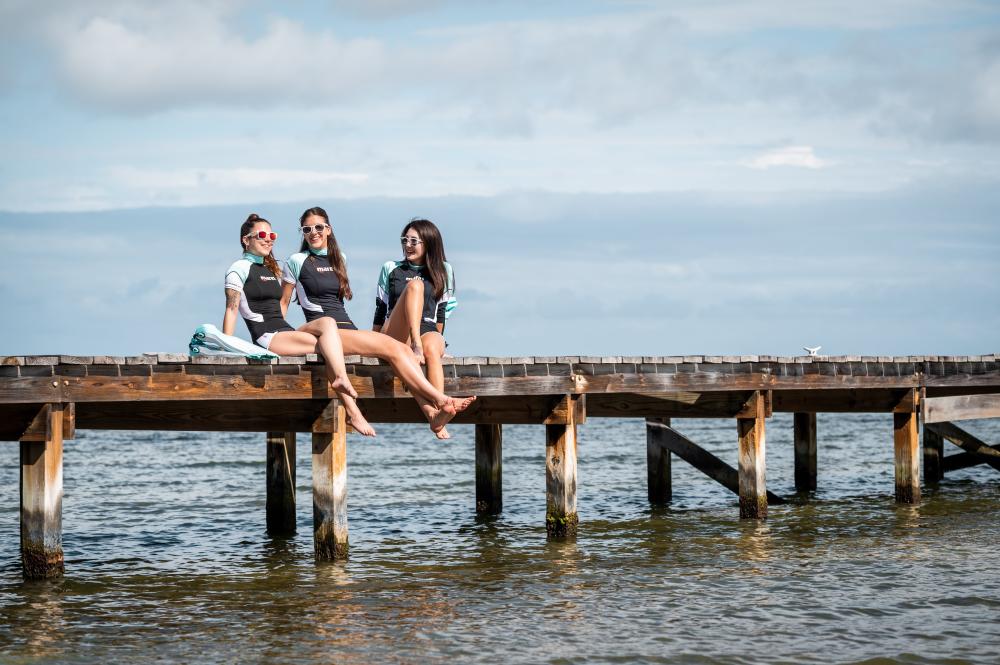 The summer may be winding down, but your diving activity does not have to. In most places around the world, the month of August still brings warm summer days with plenty of daylight hours to play in the water or bask on white sandy beaches. In fact, diving in August may be the best month for exciting adventures like shark sightings in many places around the globe.

Although August is a famous time for Europeans to go on holiday, there are plenty of locations that remain off the beaten track for those looking to escape the daily hustle and bustle of life. From shark diving along the Pacific coast to Mola mola sightings in Bali, diving in August offers fantastic underwater adventures.

Here are what we think are some of the best places to dive in August:

Just offshore from the northern tip of Mexico’s Yucatan peninsula, near Cancun, lies an area famous for whale sharks. These gentle giants congregate here every year between the months of July and September, with August being the height of their migration. These whale sharks make their way here annually to feed on plankton that blooms during this time in the warm, clear waters of the Gulf of Mexico.

You can choose from several dive and tour operators who take tourists out daily on speed boats to snorkel right alongside these fantastic creatures during whale shark season. Nothing beats the thrill of sitting on the boat’s railing while the captain pulls up alongside a swimming whale shark for you to jump into the water and start swimming beside it.

But don’t worry; Mexico is highly protective of its whale shark population. Only native Mexican boat operators with special permits are allowed to take tourists out to swim with the sharks. The entire crew is thoroughly trained on whale shark safety, and everyone strictly enforces a no-touch policy. No scuba diving is allowed at the whale shark congregation site; however, all the whale sharks spend most of their time at the surface, making snorkeling the optimal way to view these elegant beasts.

Check out the Yucatan Peninsula on SSI’s MyDiveGuide to find a whale shark tour operator.

Getting to swim alongside the elusive Mola mola is on every avid diver’s wish list. This large, unique-looking bony fish, also commonly known as a sunfish, is usually seen swimming alone in open water settings, making them a rare find. These fascinating fish are captivating with their large presence and unique body shape.

Every year when water temperatures in this area of the Southern Hemisphere hit their coolest, the Mola mola make their way to a quiet island located between Bali and Lombok called Nusa Penida to feed in the nutrient-rich waters of its deep trenches. The locals know that the Crystal Bay dive site offers the best chance at a sunfish encounter, thanks to the cleaning station found here. These Mola mola sightings make Bali one of the best places to dive in August.

To learn more about diving with Mola mola in Nusa Penida, check out the Crystal Bay dive site here.

Some of the best diving in the crystal clear waters of Portugal’s Azores islands happens during August. Thanks to its close proximity to Europe, these jewels amongst the Atlantic Ocean are a popular choice for nature lovers during this popular travel season. With nine beautiful islands to choose from, you cannot go wrong when planning a dive vacation to the Azores.

Portugal’s Azores Archipelago boasts a unique variety of geographical features, from green mountains, volcanic craters, waterfalls, and beautiful beaches on land to ancient lava flows, caves, and World War II shipwrecks below the sea. No matter your preference, the Azores has something for everyone.

Diving in August in the Azores is fantastic thanks to warmer, calmer waters and a high probability of seeing pelagic species at offshore dive sites like blue sharks and manta rays. Click here to learn more about the fantastic diving in the Azores on SSI’s MyDiveGuide.

Although the water is still a chilly 16 degrees Celsius (60 degrees F), August is a beautiful time to dive into the intriguing waters of Canada’s Gulf of St. Lawrence. August offers the warmest temperatures and calmest seas for this Atlantic Ocean waterway teeming with life. Scuba diving this beautiful area just east of Québec may not be the most popular activity, but those who take the plunge will be greatly rewarded.

During the month of August, many different whale species migrate here before heading south for the winter. Common sightings include right whales, fin whales, minke whales, Atlantic white-sided dolphins, and even the possibility of humpback whales. If you are looking for a unique adventure this summer, pull out your drysuit and head to Canada’s beautiful eastern shore. Click here to explore dive sites around the Gulf of St. Lawrence.

Every year, extreme thrill seekers make their way down to Guadalupe Island off Mexico’s Baja Peninsula to go cage diving with great white sharks. This tiny island found in the cool waters of the Pacific Ocean is a popular breeding ground for these majestic sharks from July to October every year.

Guadalupe Island shark cage diving is considered one of the best places on the planet to experience cage diving with great whites. Most days, divers will encounter 2-3 great whites; however, with August being peak shark season, it is not uncommon to see 20-30 sharks on one trip!

Guadalupe Island diving is all done on liveaboard boats. Some depart from San Diego, California, in the United States, and some leave from the Baja Peninsula in Mexico. Click here to learn more about diving Guadalupe Island from SSI’s MyDiveGuide.

No matter which adventure you choose, you can find amazing wildlife sightings in various locations of the globe during the beautiful month of August. Diving in August is sure to captivate any new diver and thrill even the most experienced. Be sure to use SSI’s MyDiveGuide to explore all your future dive destinations.