Quail Run Diver’s Quarry is a spring-fed stone quarry located just east of Rolla, Missouri, approx. 1 1/2 hours from St. Louis, offering divers a quick escape to get wet!Typically used as a training facility, there are several training platforms from 15 to 25 feet deep.

This is the 727 jumbo jet used in the Warner Brother’s movie US Marchals. Depth ranges from 15 feet to 45 feet. Penetration dives are allowed for those who are certified for overhead environments. 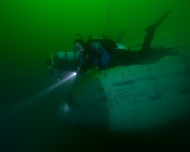 The 1,128-acre park was once the site of a coal strip-mining operation. Between June 1964 and October 1967, the Peabody Coal Co. removed more than 1.2 million tons of coal from the Boone County site, known as Mark Twain Mine, leaving barren piles of earth and numerous pits of water. 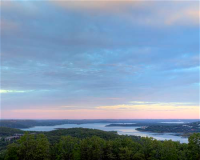 The lake is full of interesting dive sites and above average water conditions. Lake visibility is very good by lake standards throughout the summer. Water temps peak at 85° on the surface and average about 60° at depths below 30 feet.